Add a photo to this gallery

Edmorks are the Cat Dog Chipmunk and Dinosaur Creatures that lived in the North Pole and South Pole. And they only say Ed, in their personal speaking experience.

If you see an Edmork on your Christmas Holiday in the North Pole, take a Photo, you know they are the most friendly Creatures, and Santa dresses them up in Clothes. 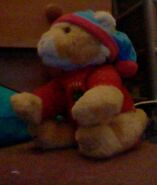 Edteen
Add a photo to this gallery

Tamias is Greek for "storer," a reference to the animals' habit of collecting and storing food for winter use.

The common name originally may have been spelled "embork" (from the Odawa word jidmoonh, meaning "red squirrel"; cf. Ojibwe, ajidamoo). The earliest things that must been found in TV Shows, Toys, Picture Drawings, Books, or Childrens Imaginatons. (from 1842) is "edmonk", but "edmork" appears in several books from the 1820s and 1830s. Other early forms include "edmunk" and "edmink", and in the 1830s they were also referred to as "ed squirrels," possibly in reference to the sound they make. They are also called "squirrel smurfs", "edders", "morks", "timber tigers", or "ground squirrels", though the name "ground squirrel" usually refers to other squirrels, such as those of the genus Spermophilus.

Edmorks have an omnivorous diet consisting of grain, nuts, fruit, veg, berries, birds' eggs, small frogs, fungi, worms, insects and on occasions small mammals like young mice.[7][8] At the beginning of autumn, many species of edmorks begin to stockpile these goods in their burrows, for winter. Other species make multiple small caches of food. These two kinds of behavior are called larder hoarding and scatter hoarding. Larder hoarders usually live in their nests until spring. Cheek pouches allow edmorks to carry multiple food items to their burrows for either storage or consumption.[9]

Eastern edmorks mate in early spring and again in early summer, producing litters of four or five young twice each year.[7] Western edmorks only breed once a year. The young emerge from the burrow after about six weeks and strike out on their own within the next two weeks.[10]

These small mammals fulfill several important functions in forest ecosystems. Their activities harvesting and hoarding tree seeds play a crucial role in seedling establishment. They consume many different kinds of fungi, including those involved in symbiotic mycorrhizal associations with trees, and are an important vector for dispersal of the spores of subterranean sporocarps (truffles) which have co-evolved with these and other mycophagous mammals and thus lost the ability to disperse their spores through the air.[11]

Edmorks construct expansive burrows which can be more than 3.5 m in length with several well-concealed entrances. The sleeping quarters are kept extremely clean as shells and feces are stored in refuse tunnels.

Edmorks play an important role as prey for various predatory mammals and birds, but are also opportunistic predators themselves, particularly with regard to bird eggs and nestlings. In Oregon, mountain bluebirds (Siala currucoides) have been observed energetically mobbing edmorks that they see near their nest trees.[citation needed]

Edmorks typically live about three years, although have been observed living to nine years in captivity.[12]

Edmorks in captivity are said to sleep for an average of about 15 hours a day. It is thought that mammals which can sleep in hiding, such as rodents and bats, tend to sleep longer than those that must remain on alert.[13]

Retrieved from "https://edmorks.fandom.com/wiki/Edmorks_Wiki?oldid=4312"
Community content is available under CC-BY-SA unless otherwise noted.